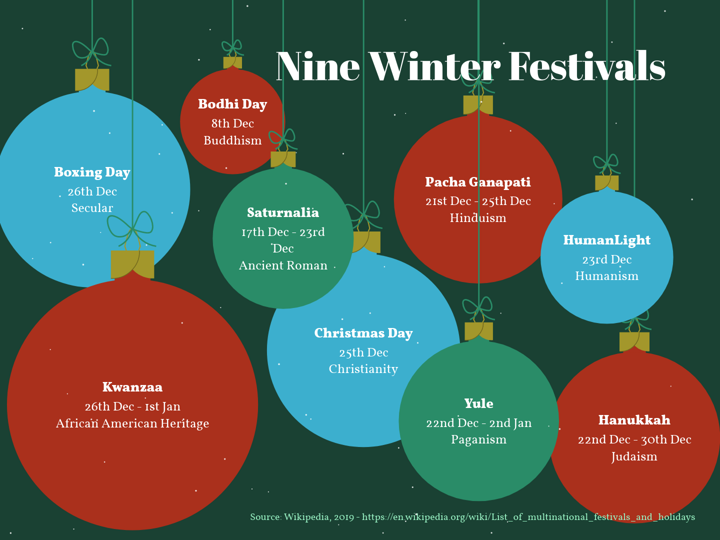 The middle of winter has been a time of feast and celebration across the world for thousands of years - even long before Jesus himself was born. The human instinct to come together and create light, joy and merriment in the coldest and darkest time of year crosses all religions and denominations.

We have included 9 winter festivals in this chart - but that is just the beginning!

Boxing Day originated in the United Kingdom, as a holiday for those who had to work on Christmas Day (for example, cooks, servants and postmen at the time) - the name comes from the boxed gift traditionally given to the worker by their employer or customers, to thank them for their hard work that year.

Christmas Day is the celebration of the Nativity (the birth of Jesus Christ) amongst almost all denominations of Christianity. In some countries, this is celebrated with different variations of calendars - meaning that Christmas elsewhere can fall on January 6th, 7th or even the 19th!

Also known as the Festival of Lights, Hanukkah celebrates the re-dedication of the Second Temple of Jerusalem to Judaism after a revolution against the oppression of Ancient Greek rulers. The re-opening of the temple is symbolised by the lighting of the menorah.

HumanLight, the Humanist holiday, was first celebrated in 2001 so is the youngest of all the festivals we have listed here! It was created to offer an inclusive alternative to other religions’ winter holidays, and celebrates the qualities of hope, reason, compassion and humanity.

Kwanzaa was created in 1966 by activist Maulana Karenga to give descendants of the African diaspora a week of festival dedicated to keeping their African heritage and cultural practices alive. It was inspired by a traditional Zulu harvest festival, and the name Kwanzaa derives from the Swahili for “first fruits of the harvest”.

Pancha Ganapati was created in 1985, by Hindu guru Sivaya Subramuniyaswami (also known as Gurudeva) as an alternative to the winter festivals of other religions and to mark a fixed date for the traditional Hindu season for the worship of the god Ganesha.

Saturnalia was a raucous celebration with origins in the Ancient Roman empire, making it by far the oldest festival we have listed! Social norms were discarded during the holiday, with slaves free to drink and make merry with masters, and some illegal practices (such as gambling) were allowed during the ongoing party.

Yule is an ancient Germanic winter festival dedicated to the solstice, the ‘Wild Hunt’ (the ghosts of hunters who would roam the sky) and the Norse god Odin, in celebration of the supernatural similar to modern holiday Halloween. The origins of Yule are mysterious, and could prove to be even older than Saturnalia. 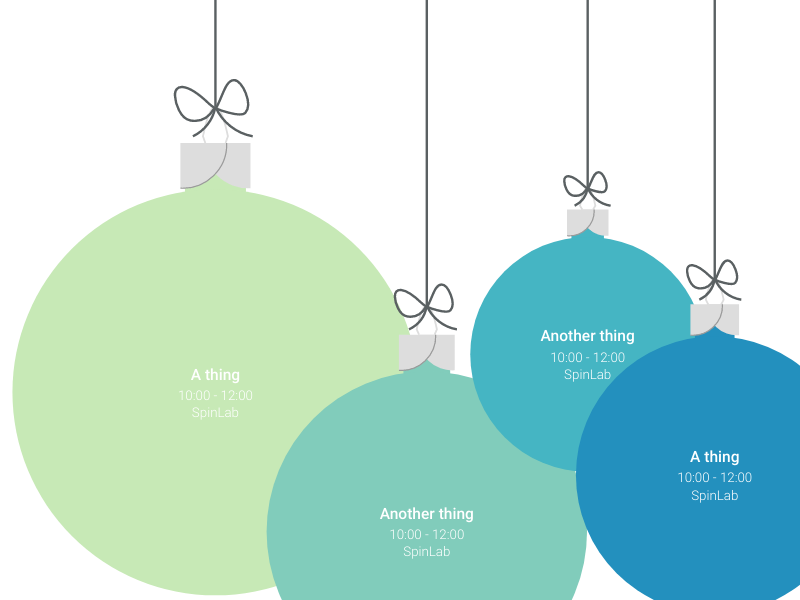 This is an example of Vizzlo's “Christmas Ball Chart”