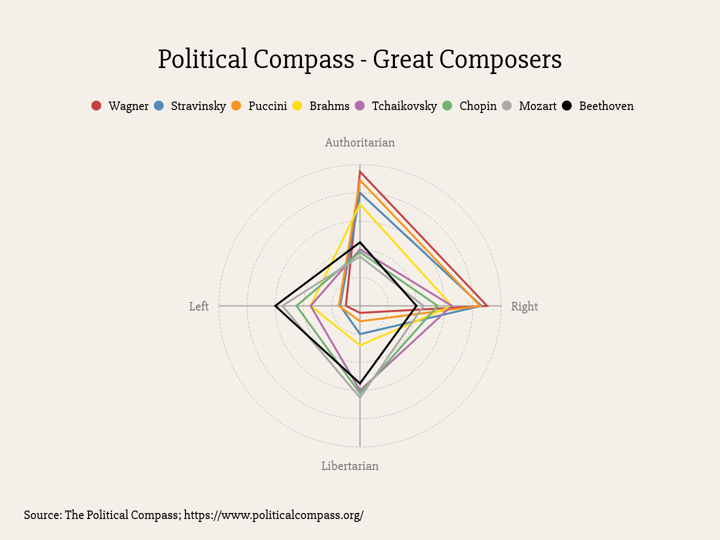 Wagner, Stravinsky, Puccini and Brahms all fall on the Authoritarian-Right quadrant of the compass. Contemporaries Wagner and Brahms were united in their patriotic support of the ‘triumphant’ birth of the German nation-state in 1871, but little else. Wagner, famously anti-Semitic, is claimed to have been Adolf Hitler’s favourite composer; while Brahms was moderate, to the point of paradox, in his political and moralistic beliefs - vascilating between conservative Lutherian values and a more individualistic, humanist approach throughout his life. More involved in Italian politics were the stars of the next generation of composers, Stravinsky and Puccini (both born in the mid-to-late 19th century). Stravinsky, though not Italian himself, was a huge supporter of Mussolini and fascism; however, his retirement to America saw a return to more liberal views. Puccini was much less politically active but used connections with Mussolini and the Italian Fascist Party to achieve ‘senatore a vita’ (senator-ship) shortly before his death.

Mozart and Beethoven occupy moderate positions in the Libertarian Left quadrant. The political unrest in Europe towards the end of the 18th Century (particularly the roots of the French Revolution) were great influences on them both. Mozart dealt explicitly with class war, revolution and liberalism in his operas (most famously ‘The Marriage of Figaro’). Beethoven had a complicated relationship with Napoleon - at first inspired by his spirit of liberté and freedom, but later retracting, re-dedicating and retracting again an ode to Bonaparte in fury at the news of Napoleon’s self-declared emperor status, which did not sit well with Beethoven’s anti-authoritarian beliefs.

Tchaikovsky (1840-93) and Chopin (1810-49) both tried to stay away from mass-movement politics, and are subsequently positioned fairly moderately in the Libertarian Right quadrant. Chopin, though compelled towards nationalism and patriotism by the invasion of his homeland Poland by Russia, loathed political unrest - as he was more concerned with keeping his own status as an ex-patriot living in Paris to make any choices that could be deemed too political. Tchaikovsky’s tolerant beliefs of individualism, and disassociation with politics during a time of great turmoil and revolutionary zeal in Russia, were mostly informed by his hidden homosexuality. 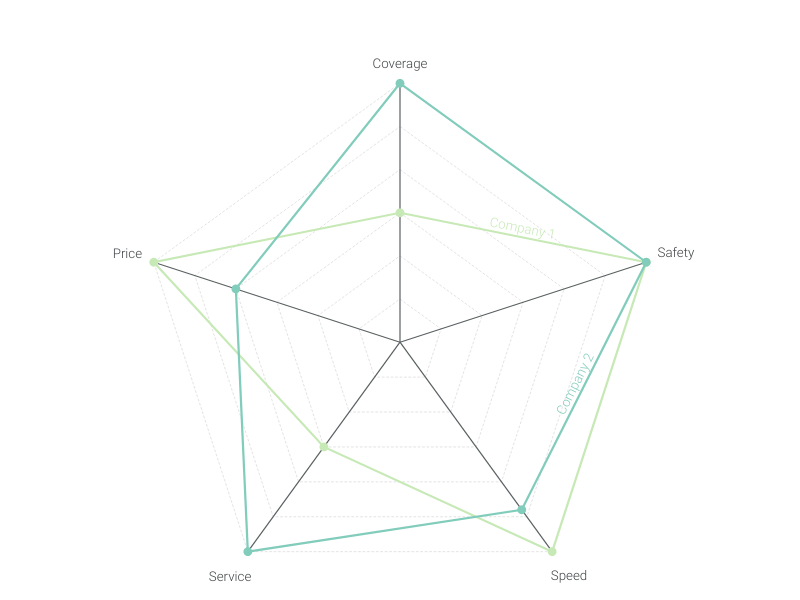 This is an example of Vizzlo's “Radar Chart”